On the pivot point of “de Kop van Zuid”, “Parkstad” and the Afrikaanderwijk is De Kuil. An urban and green neighbourhood. Existing and future residents will meet each other. De Kuil will Connect on a urban scale and social scale. A diverse set of housing typologies is designed for a large target group and reinforces the versatility of the Afrikaanderwijk. 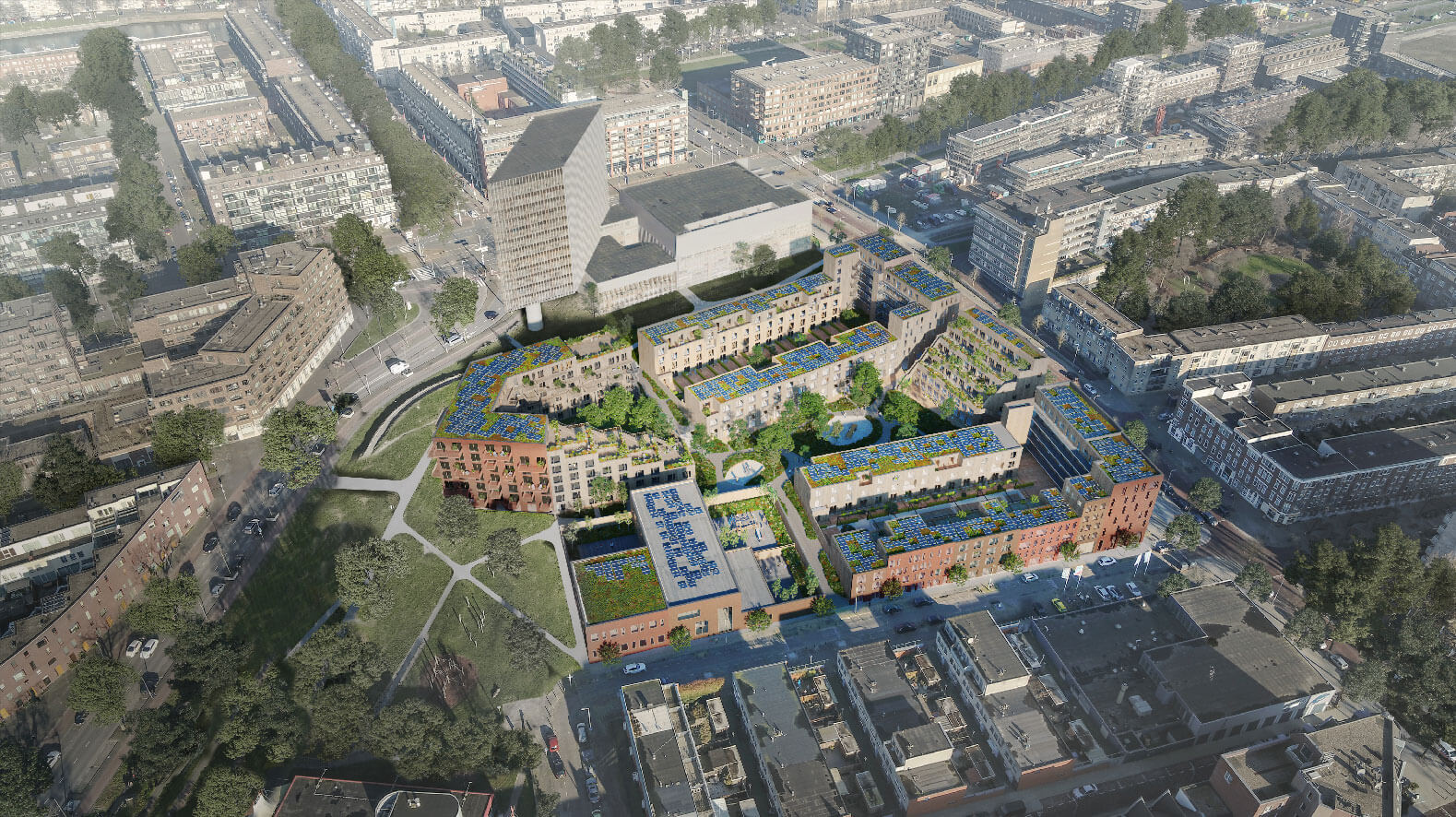 De Kuil aims to connect the urban developments and the social ambitions. The plan completes the urban network and adds specific typologies and public spaces for target groups that have not been served in the Afrikaanderwijk. In addition to this de Kuil connects topographic elements of the location with the landscape of the courtyard.

The sheltered location in the bowl of the dike is the starting point for developing a unique identity for de Kuil.

By creating physical connections between the Paul Krugerstraat, Brede Hilledijk, the small park and the Jacominastraat we create enriched public spaces with an outspoken green personality for the residents and the neighbourhood to enjoy. This contrast connects the plan with the urban structure of the Afrikaanderwijk.

By sampling existing architectural elements of the Afrikaanderwijk the outer shell has a modern twist of connecting the facades to the surrounding streets.

De Kuil poses as tough and urban with this formal brick contour, but gives a kind and green heart to the neighbourhood. This green heart facilitates social interaction: residents and neighbours meet in a green sheltered inner area.

From dike to valley

The vegetated dike to which the De Kuil plan will be resting is connected to the plan by creating a valley. The green structure on the ground level and the rooftops will naturally be continued in the plan. A part of this height difference will be used for parking. De Kuil uses scenic elements like slopes and paths with which the hidden and valley’esk quality is increased.

This is also visible in the building masses and accents in heights, these shape towards the heart of the project in a stair like manner. this creates terraces that enhance the green image.

This “green” flows into the courtyard as a waterfall of plants. because of the terraces the houses point in the optimal direction, The sun.

This distinguishes the inner courtyard of De Kuil in terms of characteristics: a natural area that is hidden behind the formal and urban facades of the plan.

The plan in which we count the five different volumes including the future OBS Nelson Mandela looks like a closed city block in its entirety. The morphology of the volumes reinforces the identity of the location by moving downwards with terraces towards the central court. This is how the buildings together shape De Kuil. The greened terraces and roofs also strengthen this character by turning to the courtyard. The multitude of private and collective green outdoor spaces of the inner area, with a combination of greenery, slopes and soft and paved paths, add a piece of city with a unique residential environment. Here will soon be an urban oasis! 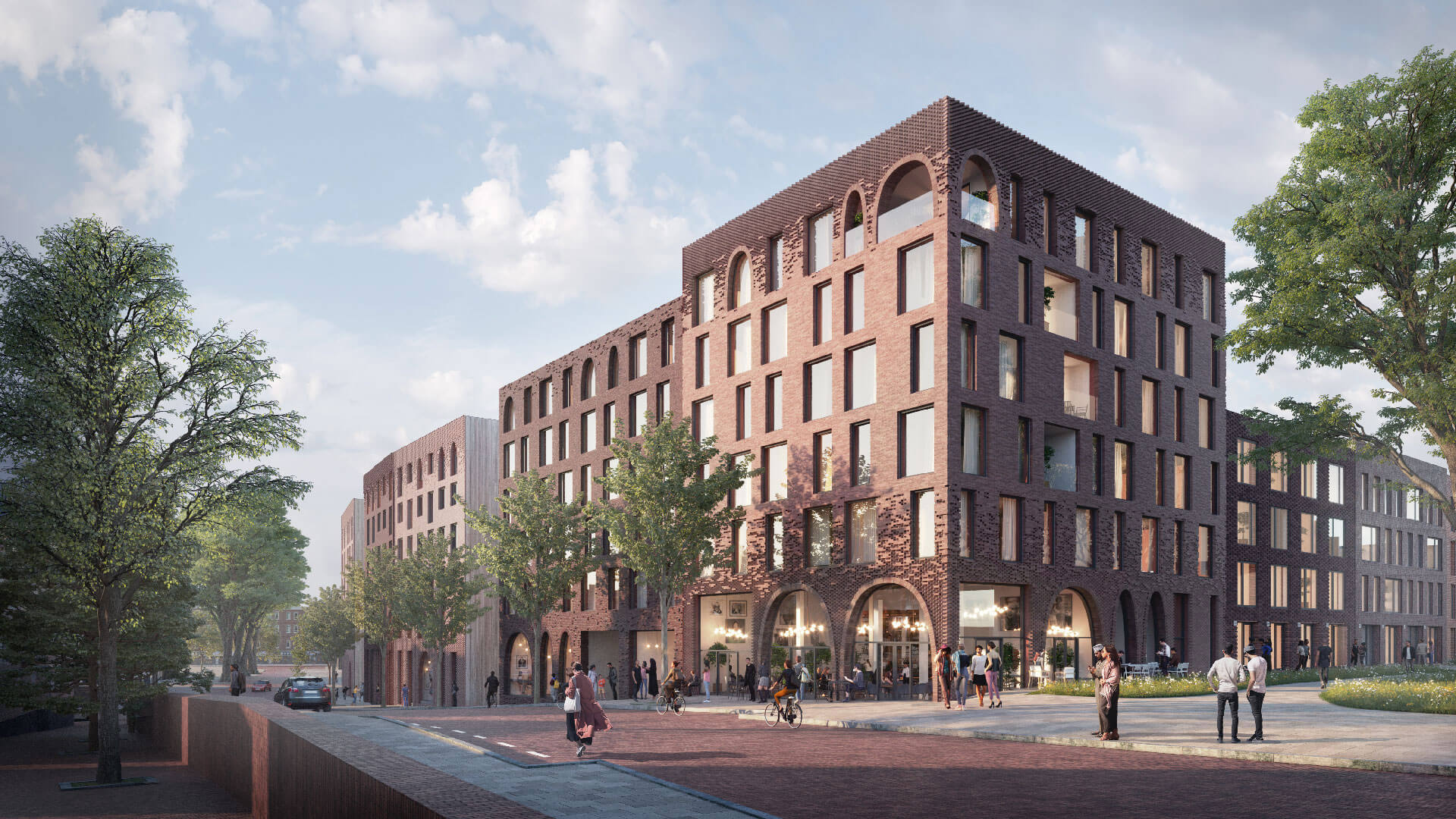 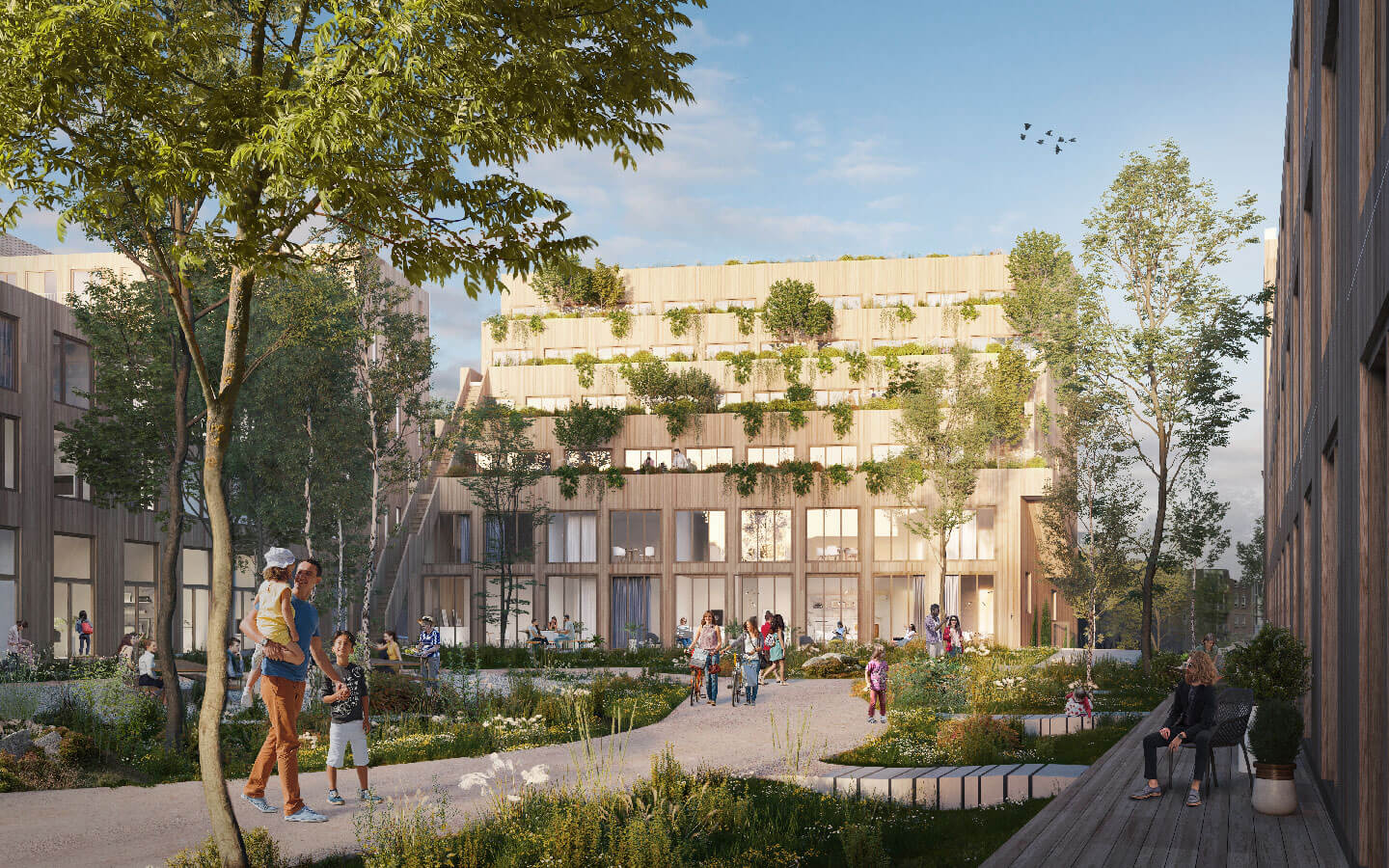 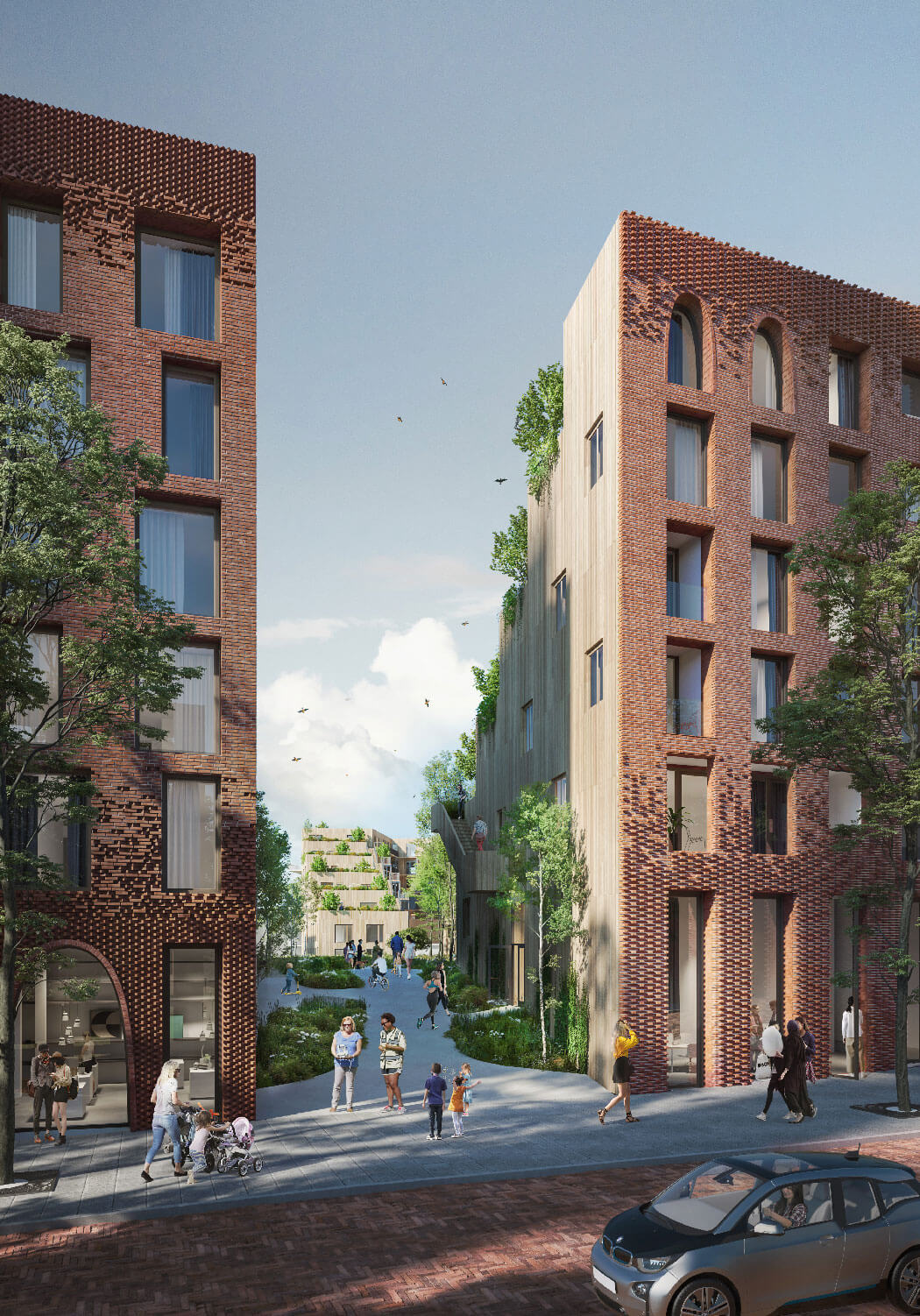 Plinth, mid and crown The facades on the side of the Paul Krugerstraat and the height accent in the bend of the hilledijk have a readable tripartition of plinth, midsection and top finish. this generates a recognizability and creates a modern view on a old architectonic style. The full facade of every grain is materialised in the same brick but varies in the structure and depth of the three parts. The plinth has masonry works that stick out which give depth and texture to this layer. The facade ending is highlighted by recessing the bricks. In the detailing of the facade openings, base and facade ending are further accentuated by recessed windows with a deep tilt. Both the protruding bricks in the base and the recessed bricks of the facade ending move in a gradient back to the flat brickwork of the middle section. This materialisation and detailing of the facades produces a surprising and contemporary image and also builds on the architectural and urban identity of the context. They add to this a contemporary chapter.

“A vally to connect”

Facades in wood In the inner area of De Kuil a scenic character dominates. Here, the wooden facades form a consistent whole, which starts directly from the entrance into the plan area. The wooden facades are light in colour and have better acoustic properties, which increases the quality and comfort of the inner area. 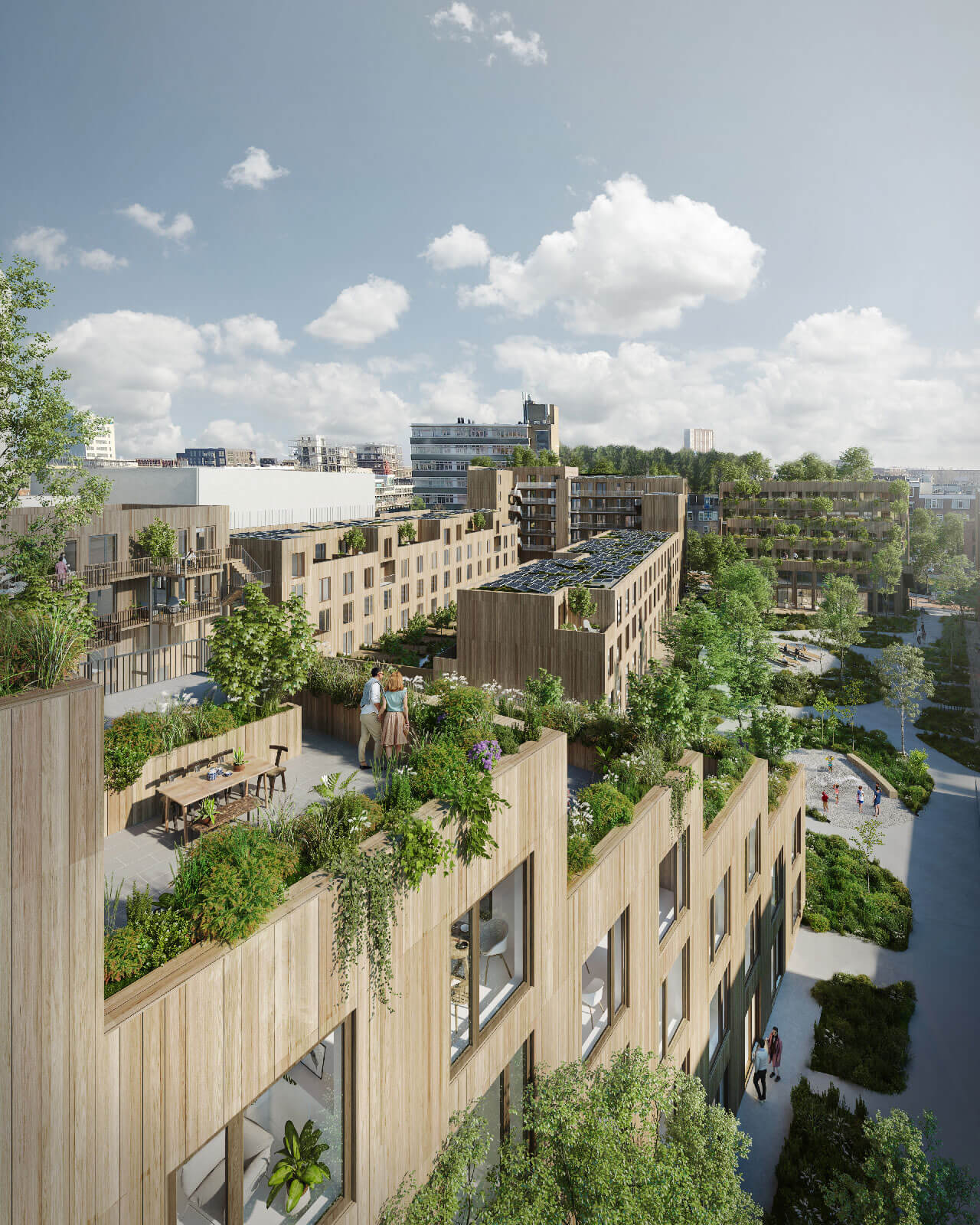